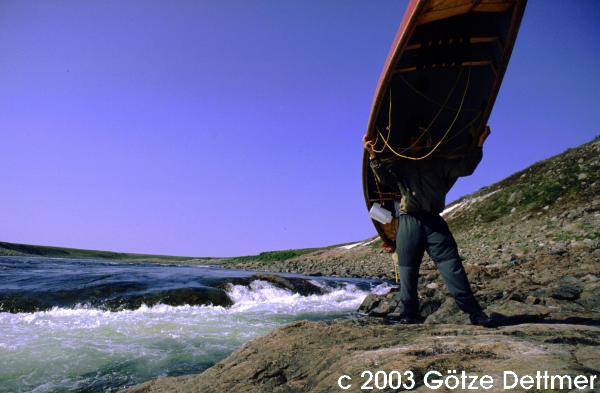 In recent years, it has become easier and cheaper to travel the remote corners of our unique planet.If there is no street, the twin otter, or even helicopter, brings you there. Many of us practice leave-no-trace camping, but when it comes to wilderness flights, we are blinded. Can one ever have a wilderness experience if a Sat phone and a ready pilot can keep you within a few hours of a coke machine? Some of the remotest areas can be plagued with the sounds of engines overhead, ferrying canoists or fishermen to their "wilderness" experience, leaving garbage dumps, fuel caches and huge amounts of burnt fuel behind.

After Jan had his own experience flying into a remote river, he suddenly noticed fuel caches, garbage dumps and small airplanes everywhere. In an effort to preserve and promote wilderness, he started tundra paddling trips using road access or commercial flights only. In 2003, he completed a 1,200 km canoe trip from Yellowknife to the Queen Maud Gulf of the Arctic Ocean, via the Ellice River. Jan demonstrated the most distant Arctic Rivers, can be reached unsupported, by fair means.

The motivation for Over the Divide, 2004 is, in part, to demonstrate fair means tripping as a viable alternative, even if you do not have the extra time required for long trips like Ellice River 2003. Our hope is to have wilderness travellers reconsider their use of access vehicles, to enter their wilderness experience. Failure to do so will see the extinction of wilderness, just as surely as thoughtless camping habits, and uncontrolled developments.